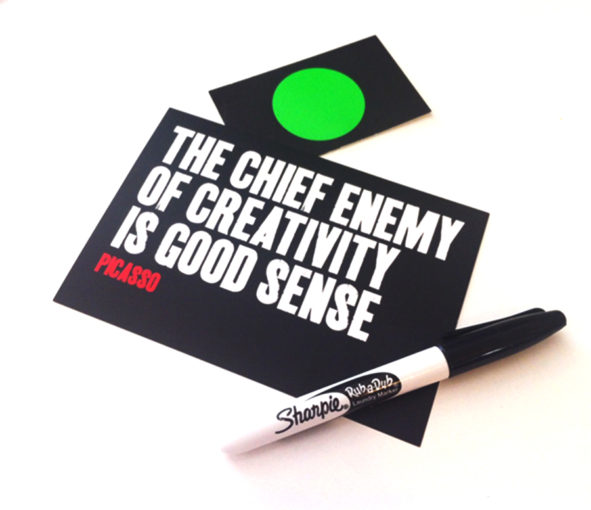 During our recent brandoasis workshop session, Suzy Jacobs of SheBusiness (shebusiness.com) nonchalantly stated something that stuck with me. Whilst trying to tap into her inner brand vision for her already successful business model – she stated; ‘But I’m just not the creative type!’.

The idea that the world is divided into the creatives and the non-creatives is hogwash, according to brothers David and Tom Kelley of IDEO, and here at studiopopsicle – we couldn’t agree more.

Part of the misunderstanding surrounding creativity comes from a lack of appreciation for what creativity truly means.

Creativity is about problem solving.

The Oxford Dictionary describes creativity as ‘relating to or involving the use of the imagination or original ideas to create something’.

Steve Jobs put it simply when he said, “creativity is just connecting things”.

Creativity expert, Sir Ken Robinson led the British government’s 1998 advisory committee on creative and cultural education and was knighted in 2003 for his achievements. According to Sir Ken, there are huge misconceptions surrounding creativity. The first being that is is only for ‘special people’ doing ‘special activities’.

People associate creativity with the arts only, but creativity is really a function of everything we do.

Robinson states that another misconception is that creativity is just about letting yourself go, kind of running around the room and going a bit crazy. Really, creativity is a disciplined process that requires skill, knowledge, and control. Obviously, it also requires imagination and inspiration. If you look at some of the people we most respect for their creative achievements, it’s because of the extraordinary insights, breakthroughs, and discipline they have brought to their work.’

By thinking creatively, both in a personal and professional sense – there is so much to be gained.

And just as David Kelley touches on – you really don’t have to be the next Picasso, Beethoven or Hemingway to live in true creativity.

So to all those Creative Non-Creatives; you just have to, “let your ideas fly.”

Need help with your next project?
Please send an enquiry.